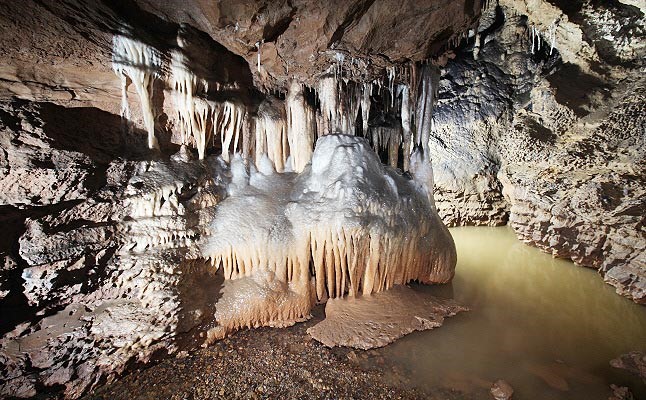 Designated as a natural monument, Gosu Cave is a limestone cave situated in Danyang-gun. This extensive cave is 1,300 meters deep, and is well known for its beauty. The name Gosu comes from the fact that in the past, the area was filled with thickets of tall grass. Rough stone instruments were excavated at the cave entrance, which revealed that this area was home to prehistoric human beings.

Inside Gosu Cave, the temperature remains around 15℃ throughout the year. There are reportedly about 25 different kinds of animal life inhabiting within the cave. Some of the rocks resemble animals or human figures, such as Lion Rock, Octopus Rock, Eagle Rock, and even the Virgin Mary Rock. About 120 various shapes of stalactites and stalagmites found here are valuable remains to researchers and scholars. As the cave is colder than most would expect, and you have to often move along holding onto metal railings, it is highly recommended that you wear warm gloves in the winter.

Popular nearby, compatible sites for a private tour in Chungcheongbukdo: